Gay Travel in Morocco: An Overview

When the LGBTQ+ communities were being persecuted in Europe, centers in Morocco like Tangier and Marrakesh were seen as safe spaces. Not only are they wonderful destinations in their own right, but the local populations have a sort of worldly ‘been there, seen that’ attitude of acceptance. In many ways, this remains true even today.

Less than 15 kilometers south of mainland Europe, across the Strait of Gibraltar, is Morocco – a fantastic destination of sand dunes, beaches, crowded markets, resort towns and jaw-dropping mountains. Morocco is a beautiful country that has a way of engaging all your senses, making it a place that is without a doubt worth a visit. Though Morocco has a reputation as a great destination for many sorts of travelers, it is not as well known for being a particularly gay-friendly destination. However, that doesn’t mean that it’s completely lacking in LGBTQ+ tourism.

Unlike Spain, its neighbor a short ferry trip to the north where same-sex marriage is legal, homosexuality is illegal in Morocco and punishable by up to three years of imprisonment. To be fair, this is rarely enforced and the strictness of the punishment varies throughout the country. This law does not apply to non-Moroccan same-sex partners traveling or staying together on their journey. So though as a traveler you and your partner are excluded from the law, you might want to know that your brothers and sisters in the LGBTQ+ community in Morocco are forced to lead a more suppressed life.

For gay travel in Morocco, it’s best to respect the local culture and practice discretion in public. In fact, public displays of affection (and you can learn more here about the essentials of Moroccan tourism) should generally be avoided by both gay and straight couples. The country’s largely Muslim population are conservative with regard to any sort of PDA. As this applies to the gay and straight community alike, for gay travel in Morocco, the LGBTQ+ community need not take offense with this reality, as it is simply a sign of cultural respect.

Tradition and custom should be taken into account by any visitor, gay or straight, traveling to a foreign country – and not just for safety! It also can be viewed as an opportunity to learn about life in a different country through immersion into the culture. Seeing something from the outside versus experiencing it from the inside provides two completely different insights into a way of life.

LGBTQ+ People and Culture in Morocco

Though same-sex sexual activity may not be legal for Moroccans, this is not to say that Morocco has no gay culture. Morocco has been and continues to be a popular destination for LGBTQ+ travelers, whether the country acknowledges it or not.  As possibly the most urban city, Casablanca is the hub for the local gay community, though not too many travelers prioritize Casablanca as a holiday destination. Despite the laws and social mores in Morocco, it has historically provided a safe haven for those wanting to escape scrutiny. In many ways it is a combination of this history, along with the often eccentric and creative personalities who have woven Morocco into their stories, that has paved the way to make Morocco the socially tolerant destination it is today.

In Tangier, the undisputed odd couple for many years was Paul and Jane Bowles. Paul Bowles, a musician and writer, had long been drawn to Tangier after famously having been recommended settling there by Gertrude Stein in Paris. Though never exactly public, it’s known that Paul Bowles was gay and Jane lesbian. In their era (they married in 1938), their marriage made a lot of sense. In Tangier, they found the perfect spot to be themselves. They reined over the art scene in Tangier for years, with Tennessee Williams, William Burroughs, Jack Kerouac, and Truman Capote all coming to call on them. In Tangier’s International Zone era, they were the king and queen of the LGBTQ+ scene.

Jostling with with the Bowles’ for the top-spot on the Tangier social scene was David Herbert, British socialite and writer who spent almost fifty years of his life in Morocco. Author Ian Fleming referred to The Honourable David Reginald Herbert as ‘the Queen of Tangier’, and for those travelers wanting to revisit some history, a stroll through the churchyard of St Andrews Church alongside the medina in Tangier, will find his grave simply marked with the words “he loved Morocco”.

Yves Saint-Laurent (yes, that YSL) with his partner Pierre Bergé saved the Majorelle Garden in Marrakesh from destruction. Over the last half of the 20th century, Yves and Pierre were one of Morocco’s true power couples. They were appreciated not only by the people of Marrakesh, but even by the royal palace. In 2010, as a small recognition of his contribution, the street in front of the Jardin Majorelle’s entrance was renamed the Rue Yves Saint Laurent. Her Royal Highness, Princess Lalla Salma, was there to unveil the new street sign.

On a more contemporary note,  Abdellah Taïa, writer, director and actor, is perhaps Morocco’s most famous gay man and certainly one of the most public. He has a number of books worth reading for those interested in scratching beneath the surface of Moroccan culture while traveling – his book An Arab Melancholia is a coming of age tale of a poor teenager who dreams of the movies and struggles to define his sexuality against a homophobic culture.

Rachid O is another Moroccan author whose writing takes on the relationship between sexuality and the muslim world. His work Chocolat Chaud is about a Moroccan man exploring his sexual identity in France. It is possibly noteworthy that both Rachid O and Abdellah Taia have chosen to make their homes in France.

Tangier remains more of an ‘up and coming’ destination, particularly with the French rediscovering this Mediterranean gem and so much work being put into projects around the city to revive it to its Barbara Hutton-era, jet-setting glory. There is a small expat gay scene here, but one gets the feeling that either you’re a little late (or possibly a little too early) to the party.

Meanwhile, Marrakesh is the clear epicenter for all expat LBGTQ+ activity in Morocco. Of course, there is a long history of famous people, such as Yves Saint-Laurent, calling Marrakesh home. Marrakesh is quite simply a creative and cosmopolitan city with tourism as its beating heart, and you’re likely to find a mixed crowd at certain bars and clubs. 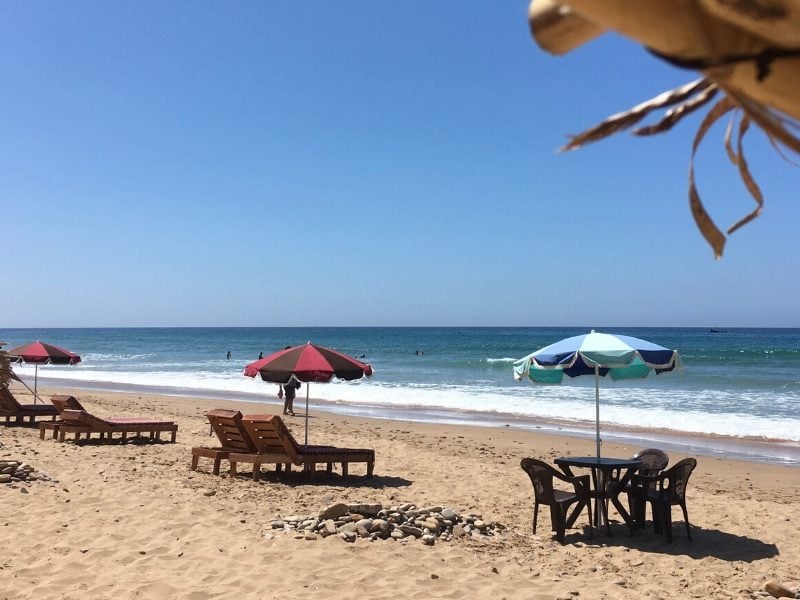 While coastal destinations like Agadir and Essaouira don’t have a gay scene, per se, the beaches and sunshine still attract a large European gay following. Moving out of the more urban areas into the mountains and the desert, you will find that communities are more more conservative, but again, generally tolerant.

Though LGBTQ+ individuals in Morocco are not uncommon, Moroccans still have an expectation of men and women to marry and start a family. To not do so would be unusual. This is one of the issues gay travelers may face when interacting with the locals. Still, same-sex couples staying in big hotel chains or in foreign-owned riads in cities like Marrakesh should not encounter any issues as they are quite used to and accepting of many types of visitors.

Like many other non-western cultures, hand holding between men is not uncommon, but this simply indicates male friendship and nothing more. So if you see this occur do not make any immediate assumptions. It is also likely that you will not catch this quite so often in more urban areas. Many Moroccans are aware that in the western world two men holding hands often indicates them to be a couple and Moroccans would prefer to avoid this assumption.

For an interesting ‘slice of life’ insight into Queer Morocco with all its contradictions, the podcast AfroQueer  explores what it means to be queer and African in a series of conversations that take you on a journey across the continent. Have a listen to Season 3 Episode 1: One night in Marrakech.

Outlook of LGBTQ+ Rights in Morocco

The potential outlook for LGBTQ+ equality in Morocco remains bleak. Traditional standards and a conservative religious culture means it will likely be a long while before the Maghreb catches up with western standards of LGBTQ+ acceptance. As it stands currently, there is no law against discrimination or harassment on the basis of sexual orientation or gender identity in Morocco

One LGBTQ+ Morocco rights organization worth mentioning is Kif-Kif, which is an Amazigh expression that means ‘same’. Kif-Kif, also known as The Association of Lesbians, Gays, Transsexuals and Bisexuals of Morocco, supports LGBT rights in Morocco and Spain, and for legal reasons, is registered and run from Spain. M.A.L.I. is another Moroccan organization, based in Rabat which, while it does focus strongly on the rights of women and sexual discrimination, has a broad agenda fighting discrimination in general and LGBTQ+ rights in particular.

Morocco’s culture and laws may not yet align with the nearby western world as its religious and familial traditions run deep. Nevertheless, Morocco continues to tantalize the gay community as a wondrous and exotic destination. LGBTQ+ travelers wanting to visit Morocco should exercise caution, but can relax knowing that it is a wonderful destination with lots of do and experience.

Journey Beyond Travel can help you customize a unique and wonderful experience in Morocco, taking into consideration any concerns you may have. Our on the ground staff are aware of local culture and can provide you with the best experience while providing advice and a tour of Morocco you’re not soon to forget! Contact us today to get started!

This article was written by world traveler and blogger David Brown. You can follow the adventures (and misadventures) of David and his husband at TwoBadTourists.com. You can also join up with David on Instagram to learn more about world wayfaring, festivals, and more!

This article has been updated by Pauline de Villiers Brettell.

Photos by Lucas Peters. Lucas is the principal photographer and author of the Moon Guidebooks: Morocco as well as Marrakesh and Beyond published by Hachette. He edited and contributed to the Our Morocco anthology and helps the travelers of Journey Beyond Travel experience the adventure of a lifetime. He lives in Tangier with his family.