For over a thousand years, Marrakesh has been many things. A hub for trade. A cultural melting pot. A powerful world capital. A tourist mecca. For all of these reasons, and many more, make the entire old medina of Marrakesh a UNESCO World Heritage Site.

My first time in Marrakesh, November 2009, was overwhelming. It was the first city in the world where I witnessed donkeys, camels, mules, horse-drawn carriages, pedestrians, four-door sudans, scooters, motorcycles, bicycles, herds of sheep, and city busses all sharing the same congested two-lane road. It didn’t help that it was nearly midnight and I was attempting to navigate foreign streets without a GPS.

My friend, Youssef, a Marrakeshi, tapped on his phone in the passenger seat, one eye half on the road, telling me things like:

“We should have turned right back there.”

And: “We just missed our left.”

And: “Watch out for that herd of sheep ahead.”

This was my introduction to Marrakesh and I loved every second of it. I white knuckled it through the mad throngs, ready to park the car and join the chaos.

The charm of Marrakesh, for me, is that it is so many things at once. It is an old city with an old soul, a magician of sorts that waves a wand and suddenly a door opens and there is something new, unexpected, completely modern, perhaps more at home in Tokyo than Morocco. There are a thousand “blink and you’ll miss it” moments that speed by but then again, at that exact same moment where a moment speeds past, time stretches out like a slow pour of mint tea, frothing perfectly.

Marrakesh is many things, but what about it makes it a UNESCO World Heritage Site?

To become a world heritage site as recognized by the United Nations through the United Nations Education, Science, and Culture Organization (UNESCO), the first element that has to be established is that the site in question has “outstanding universal value.”

A quick glance at the UNESCO website, and you are treated to a brief history of Marrakesh. However, what quickly jumps out is just how many important landmarks and monuments are in the old city of Marrakesh. The Koutoubia Mosque, the 77 meter-tall minaret of which UNESCO declares is an “essential monument of Muslim architecture,” is one of the many highlights. The El Badi Palace, the Bahia Palace, the Ben Youssef Quranic School, the Saadian Tombs, and of course the Jemma el Fnaa, the great public square of Marrakesh, are all sited as important elements of establishing this universal value.

In addition to the many monuments, the gardens of Marrakesh, such as the Menara Gardens, and the fact that the old medina of Marrakesh retains a well-preserved original conception which continues to utilize old building materials and techniques, and the argument for what makes Marrakesh so outstanding is an easy one to make.

Also, this all makes it hard to really appreciate, even if you have three days in Marrakesh.

That said, it is the delicate balance of Marrakesh that likely pushed UNESCO to declare it a world heritage site. The entire 700 hectares of the old medina is incredibly vulnerable due to the “demographic change.” Meanwhile, the entire old city itself is “an outstanding example of a living historic town with its tangle of lanes, its houses, souks, fondouks, artisanal activities and traditional trades.”

Since 2009, the boundary considers for Marrakesh on UNESCO’s World Heritage List is defined by the original ramparts. These ramparts encircle the entirety of the old medina, the kasbah, and the Jewish quarter. There are several main gates that are used for entrance into the medina that break up the 12.5 mile (20 kilometer) rammed-earth ramparts.

Interestingly, these boundaries might be revisited at a future date with the hope of expanding this heritage site.

The real vulnerabilities Marrakesh faces are old families moving from their historic homes into the new city, as well as unregulated construction in the old medina and, interestingly, the abandonment of the Khettaras — underground drainage galleries that have been funneling water from the High Atlas into Marrakesh for a thousand years.

Without tourism in Marrakesh, as in Fez and other parts of the country, much of the traditional construction and decorative techniques may have fallen by the wayside. For all of its faults, tourism really has helped to keep the historic center of Marrakesh authentic.

Today, the major monuments, not to mention other public buildings and many historic riads, are still renovated and restored using traditional techniques that have been past down from father-to-son for hundreds of years. Artisanal trades involving geometric tile work (zellij), lime plaster (tadallakt), sculpted, hand-painted wood (often locally-sourced cedar wood), wrought iron work, intricate plaster work, et cetera, are all supported in the endevour to keep Marrakesh as authentic as possible.

These days, there are “Protection and Management Requirements” that regulate much of what happens in the old medina of Marrakesh. These were drafted in the hopes that Marrakesh will continue to be what it has been for generations to come. These days, though still not perfect, this is a greater focus on curtailing unregulated construction.

Additionally, being able to sustainably protect the old city is at the forefront of the conversation. Discussions of the benefits of ancient construction techniques and the use of natural materials has led to a rediscovery of sorts of the wonders of old Moroccan architecture.

I think back to that first night in 2009. After we parked the car, Youssef and I ducked inside Bab Doukkala and walked through the neighborhoods. This part of Marrakesh was surprisingly quiet. Nothing like the streets we had just come from. We twisted and turned until we ducked through a low door and into his family’s home. I was overwhelmed by the smell of night jasmine. It was in the courtyard perfuming the whole house. A quick glance above to the glittering night sky and I realized that Marrakesh was exciting and chaotic, yes, but there was a quiet, contemplative nature to it as well.

What makes Marrakesh so alive, in many ways, are the things that are no longer living. It is the ephemeral breath of history that floats by while you traverse the dusty old medina. The living past that whispers to you while you duck into the Saadian Tombs or the Bahia Palace or into a friends home.

It is no surprise, really, that UNESCO has dubbed the entirety of the old city a World Heritage Site. In the end, they had no choice!

Of course, Marrakesh isn’t the only UNESCO World Heritage Site in Morocco! There are quite a few. Check out some more of these incredible sites here:

Below is an easy-to-reference list to some of our other articles that dive a bit deeper into specific monuments and sites of Marrakesh. 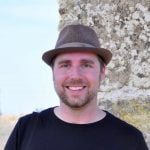 Text and photos by award-winning writer, photographer, and Morocco expert, Lucas Peters. After spending years traveling to the distant corners of Morocco and writing about his adventures, Lucas penned the 1st and 2nd editions of the best-selling Moon Guidebooks: Morocco as well as Marrakesh and Beyond, both from the Moon Guidebooks series published by Hachette. He edited and contributed to JBT’s Our Morocco anthology and helps the travelers of Journey Beyond Travel experience the adventure of a lifetime. He lives in Tangier with his family.