When traveling abroad, if you take the time to seek out and learn about local traditions, you’ll glimpse a window into what shapes a place and its culture. Sometimes these local traditions take the form of particular foods prepared in specific ways. Other times they might be a certain form of dress, community festivals, day-to-day routines, and music. All of which may seem exotic to visitors. But to locals, these typical traditions might seem to be rather hum-drum affairs or something they take great pride in. Here are a few things you should know about some of the more typical traditions in Morocco you can expect to find on your journey.

In Morocco, some of the most flavorful traditions are easily accessible to visitors. Like other cultures around the Mediterranean, and really around the entire world, what one eats and drinks is central to the social fabric.

Drinking mint tea is a cherished beverage all around the country. The making and consuming of tea plays an important role in the fabric of Moroccan social life. Serving a mint tea in homes, cafes, and small businesses is all part of local hospitality. Regardless of where you find yourself sitting in anticipation of your refreshing cuppa, your host or server will likely ease out of the kitchen carrying a tray adorned with a long-spouted, silver teapot and several small glasses. Watch carefully as the tea is poured from at least a foot above the small drinking glass to create a thin layer of foam on the surface.

A quick note: it’s often thought that the higher the pour, and the more foam that is created, the more “honored” a guest one is. Of course, this bit of showmanship also allows the person pouring the tea to display even more generosity and hospitality!

The most commonly consumed version of tea in Morocco is made with green tea prepared with locally harvested mint leaves and several lumps of sugar. Regional variations also exist. For instance, tea in the north typically tastes sweeter, while some areas of the country add pine nuts or sage. This is perhaps the most typical traditions in Morocco you will experience.

National cuisine helps define cultural identity in almost every country, and Morocco is no exception with its bouquet of Mediterranean flavors. Lunch is traditionally the biggest meal of the day (except during Ramadan), typically taking place from noon to 3:00 p.m. or so, often followed by a nap. If you opt to take your time and enjoy a sit-down meal, look forward to staying a while and savoring multiple courses. Couscous is the traditional main course, generally prepared for eating after the Friday prayer. Couscous is often cooked with vegetables, nuts and spices and served with meat, such as roasted lamb or chicken cooked with lemon and olives.

Not to be outdone… Morocco is also well known for its tajines. A tajine is a richly flavored stew slow-cooked in an earthenware pot, from which is takes its name. There are numerous varieties of tajine. A typical tajine is prepared with meats, vegetables and sauce, flavored with a combination of Moroccan spices. Commonly, you can find a vegetarian-friendly version of this dish around the country, any day of the week.

There are a few historic forms of music in Morocco. Though “Chabbi” (literally “popular”) music is the most commonly heard in taxis, airports, and other places you might find yourself tuning in to the local sounds, there are more culturally interesting musics that have been around for generations. From Amazigh folk songs found in the mountains, to the Gnawa imported across the vast Sahara, Andulsi music from the Iberian peninsula, and Sufi trance songs, the traditional music of Morocco is vast and varied. Even if you don’t understand all the lyrics, it’s safe to say the there is something for everyone!

Of the typical traditions in Morocco you’re going to hear, you will also hear the call to prayer shouted (sometimes sung) five times a day from the mosques. That said, the Moroccan call to prayer is not generally thought of as “the most beautiful” to listen to, musically speaking. This usually belongs to the Syrians who generally have a very melodic call to prayer.

Though you can be assured of hearing the call to prayer more than a few times along your journey, you’ll usually have to find a local festival or concert to hear live traditional music. Some locals with a love for traditions might have some music downloaded or on CD. Here is a list of Moroccan music to get you started on your Moroccan journey before you board that plane : https://www.journeybeyondtravel.com/blog/moroccan-music-top-8.html 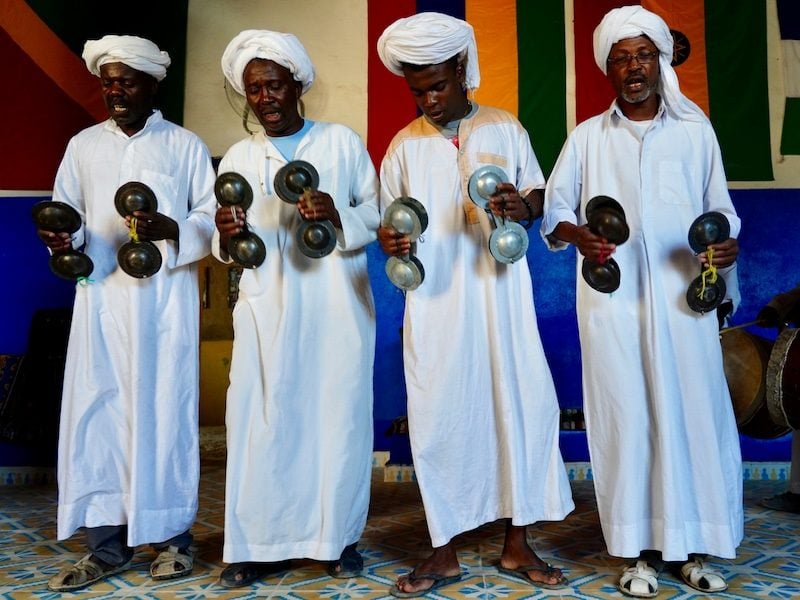 As you move around the country, you’ll find that the manner of dress changes considerably. This is one of those typical traditions in Morocco that is truly inescapable often fascinating. You’ll find people often dress “in the Western style,” particularly around the big cities. Jeans, tee-shirts, dresses, these are all very common to see.

Equally common are more traditional garments. You’ll find djellabas just about everywhere, for men and for women. These are long robes with a hood that can be pulled over. They are generally made of wool and quite heavy to protect against rain and cold in the mountains. In the warmer regions, they’ll be made of light weight cotton or, nowadays, polyester, and meant more for protection against the sun.

In the north, you’ll see many people wearing a sheshia hat — this is wide-brimmed hat made of woven reeds and often decorated with colorful pompoms. The women in and around Chefchaouen, in particular, are known for sporting sheshia hats alongside colorful striped garments folded around their bodies.

If you’re invited to a Moroccan wedding or other more formal event or party, you’ll likely see versions of a Moroccan kaftan, which is a traditional dress for women. There are many regional variations on this dress in different colors and cuts. For local weddings, it is not unheard of for a woman to have seven wedding dresses for the wedding party!

Of course, in the Sahara, men still sport the famous blue robes of the nomadic desert people.

Other Traditions in Morocco

For tourists, visiting a hammam feels exotic; for Moroccans, bathing in a hammam is a centuries-old tradition. Akin to a spa experience, the scrubbing and cleansing that takes place leaves skin exfoliated and rejuvenated. Many upscale hotels offer stylish, full-service hammams in-house. However, if you want an authentic, more rustic experience, ask your hotel’s staff to recommend a neighborhood hammam that is frequented by locals.

The country’s maze-like medinas present tradition around every corner. Even when tourists abound in full force, locals outnumber visitors in the historic alleyways. Locals and visitors alike engage in the long-standing tradition of haggling with merchants over any purchase from basic household items to novel handicrafts. The souks display an array of artisan wears which can be enjoyed when you travel to Morocco, many of which are still made using traditional methods that date back several generations. And since shopping works up an appetite, you are never far from a café offering a traditional meal complemented by mint tea!

Written by Shelley A. Gable, instructional designer and freelance writer.